My First Days With Pulse Creative 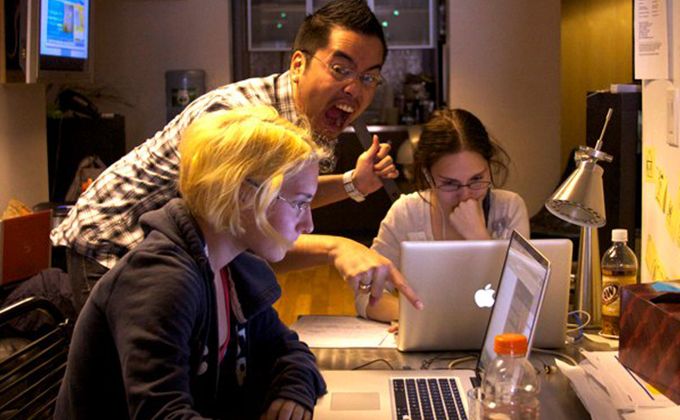 “Find out what I have to do to become an astronaut.”

That was the first thing ever told to me at Pulse Creative. Before joining Pulse Creative however, I did a brief stint at a relationship/celeb blog. As a creative writing major from Central Florida, I was thrilled to get an internship at a relationship/celebrity blog in New York. Based on the phone calls between my boss and myself, I would be writing blog posts on celebrities and how us “normal people” could find relationship advice out of what they did in their high society romances. I could not wait to get started in Long Island. However, when I actually started working there, my job did not include writing.  I was looking at hundreds of blogs each day and writing what ads they had on their sites. I would come home from work and I would hear my twin sister, Jess, tell me how amazing her internship at the Pulse Creative was.

That evening I emailed Monica, my sister’s boss, saying that if there was ever a need for a writer in the future, I was offering my candidacy. Within ten minutes of sending the email I had received a response saying that Pulse would be honored if I join. Just like that, I quit my internship and joined a new family!

I started my first day on a Thursday, which wasn’t too shabby, if I do say so myself. When we arrived, my sister went off to her desk, and I awkwardly sat on the couch next to her desk. Then from a voice in the back room Jess was called back. I followed her to the back room and when I got there a man in an awesome Captain America shirt looked me right in the eye and told me, in a no-nonsense voice, to find out how he could become an astronaut. I went right to my sister’s laptop and learned everything I could get my hands on. After I presented Dhare (the man who wanted to become a spaceman) with the packet of information that I had printed out, he then turned to Jess and myself and said he had another task for us – to come up with mini games for an online game idea that he was developing and to pitch to him names for the game. It was so much fun to be creative – to be free from excel spreadsheets!!!

When Monica arrived at the office in the late afternoon returning from a meeting, she introduced me to the group and informed us that I would be writing for the company’s blog and to become familiar with my new family by interviewing each of them. Just so you know, when I interview people I don’t know I am the most awkward person who has ever existed. I interviewed three of the four guys who worked with me at Pulse Creative and I forgot to ask them who they were, (which is kind of the whole point of the interview). So, instead of asking them the proper questions I ended up asking them what they wanted to be when they grew up (Dhare: astronaut; reTodd: music video director; Mikey: lawyer) and what they did during the day (Dhare: pretend to look busy; reTodd: edit videos and render them; Mikey: TBA. He left before I could get to him). The guys were really relaxed and gave the office a fun, whimsical feel to it.

At the time, Pulse Creative was working on a huge event with Dance With Me dance studios. “All the Right Moves! Summer Invitational 2011” was that Sunday (June 5th) and everyone was busy. The day event was a competition between the three branches of the studios and at night was the main event with Kirstie Alley and Maksim Chmerkovskiy. But before this event could get started Team Pulse had to get everything ready. JHud, as my sister is called to distinguish her from the other Jessica in the office, and I were given a list of items that we needed and a credit card and thus the Twintern’s  (twins + intern) adventure across Manhattan began.

Once that was all said and done we had a team meeting to discuss the next few days’ schedules. This would be one of Pulse’s larger projects and everything had to work properly. There was a schedule that we called the “Bible”; it had everything about the event in it, from contact numbers to what was for lunch. So if, by any chance, Monica, Allison, Alex, Jason, or reTodd died in a freak cab accident, anyone who found the “Bible” would be able to run the show and no one would know anything was wrong. JHud and I were given the task of waiting for chocolates and little shampoo bottles to put in the swag bags. The delivery would come to the office at 9:30AM on Saturday, so we had to be at the office at 9AM. Once we had the promotional items in the office we could go about our day. However not everything went according to plan. Some of the items never showed up, so we ended up staying until 7PM.  And on Sunday we were supposed to go to the Manhattan Center, the venue for the event, at 5PM but we ended up arriving at 8AM. We were more than a little sleepy, but we had a job to do, dammit! Our personal tiredness had to be put aside for the greater good. We had a show to put on. Most people don’t work huge celebrity events on their third day of work, but this wasn’t a normal internship that I had gotten myself into.

This was something more…