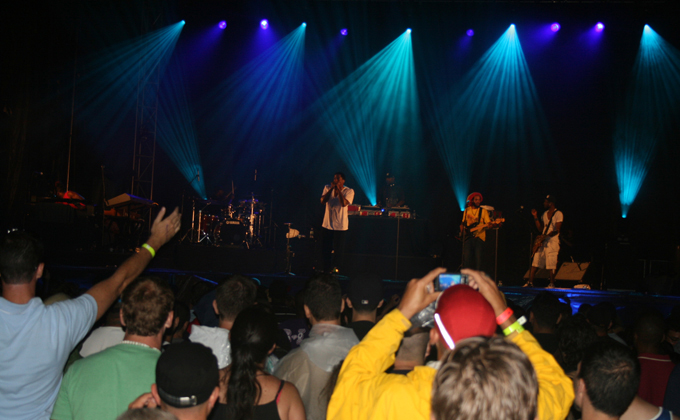 THE concert event of Summer 2009 occurred this past weekend at Liberty State Park, New Jersey.  ALL POINTS WEST is a 3-day arts & music festival that took place Friday, Saturday and Sunday along the New York City skyline.  For those in attendance, it was full of memorable moments.
While rain poured from the skies for the better part of 3 days, there was also an all-star lineup of performances to look forward to: Jay-Z, Tool and Coldplay.  In all, more than 50 acts played on three unique stages including up and coming acts like Yeah Yeah Yeahs, Vampire Weekend, and The Cool Kids, along with a few old school performances from Echo and the Bunnymen, Organized Confusion and Pharcyde.

"Queen of the Valley" stage at All Points West

Q-TIP performs on the "Bullet" stage

Pulse Creative was lucky enough to be on hand for a few incredible performances.  Friday evening we started off with vintage Q-TIP, who performed all of his Tribe Called Quest hits, along with a bunch of songs from his solo albums and recent release “The Renaissance”.  JAY-Z headlined Friday’s show and did so by declaring “I am home!”.  His show lasted nearly 90 minutes and he kicked off his set with a tribute to The Beastie Boys and a rendition of “No Sleep ‘Till Brooklyn” which sent the crowd into a frenzy.  JAY-Z replaced the Beastie Boys just days before the scheduled performance, to allow Adam Yauch of the group to undergo treatment for cancer.  He also lit up a monstrous stage screen with images of Michael Jackson when he performed “H.O.V.A” – fittingly so since the sample used was originally from The Jackson 5’s “I Want you Back”.  JAY-Z was thankful for all those came to see him and “ruined their new sneakers” in the process.  Perfectly stated!

The crowd awaits Jay-Z to take the stage

Jay-Z's tribute to The King of Pop

Although the crowd experienced the worst weather possible with hours of rain descending from the skies creating muddy fields across the venue, concert promoters AEG rewarded Friday ticket holders by allowing them to return for free entry to either Saturday or Sunday’s festival.
We returned Sunday night for Coldplay, who filled the skies with music.  They too had special tributes: one for the Beastie Boys and another for Michael Jackson.  Chris Martin did a harmonic acoustic version of “Fight For Your Right” which had the entire audience whispering the chorus.  Later, walking out onto a second stage set towards the back of the audience, the entire group performed their version of “Billie Jean” as a memory to The King of Pop.
It is obvious that ALL POINTS WEST has set the bar for music and arts festivals in the NY Metropolitan area.  The outdoor venue at Liberty State Park is perfect for 3 large stages, easy access and commuting to and from are great compared to other venues throughout NY and NJ, and the entire setup is perfect.  Many sponsors were on hand to impress the crowd, including H&M, Major League Baseball, and Toyota.  Clearly, this year’s festival has set the benchmark for the future.  We are excited to see what next year brings, and HIGHLY RECOMMEND this festival for both music fans and sponsors alike.
Special thanks to concert promoter AEG and our colleague, Dave Cohen, for setting up our experience.
Live From Somewhere…