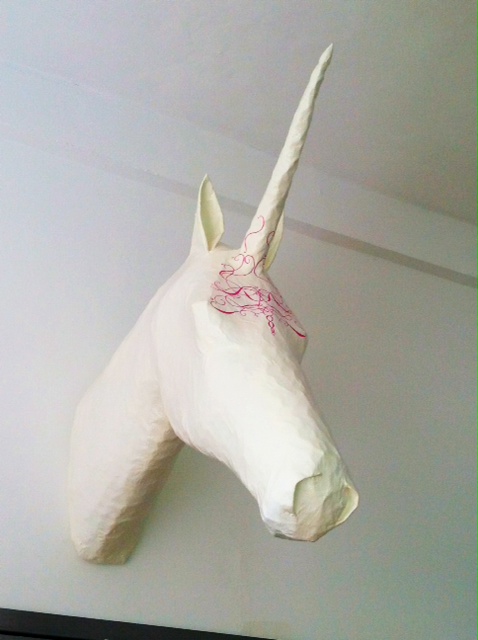 According to Wikipedia, Legend has it that: “The unicorn is a legendary animal from European folklore that resembles a white horse with a large, pointed, spiraling horn projecting from its forehead, and sometimes a goat’s beard and cloven hooves. First mentioned by the ancient Greeks, it became the most important imaginary animal of the Middle Ages and Renaissance when it was commonly described as an extremely wild woodland creature, a symbol of purity and grace, which could only be captured by a virgin. In the encyclopedias its horn was said to have the power to render poisoned water potable and to heal sickness.”

As a symbol of purity and grace we welcome our newest art piece ‘Legend’, a unicorn. Legend is the first out of a three-piece animal head trophy collection created by artist Becka Noel.  Some members of Pulse Creative said Legend was, “Bigger than they expected.” The resending response was “That’s what she said”. With that being said, the piece is huge and resides over the HBIC’s (Head Boss In Charge) office, where the two other pieces will also be hung. Hopefully ‘Legend’ will purify our creative minds and abilities, from our sometimes (actually often) dirty minds and drunken nights.

Within the next few weeks, we look forward to welcoming the rest of the collection: Rabbit and Gazelle. We love Becka Noel not only because she is Dhareza’s wifey-to-be but also because of her creative genius.