The Things She Carries 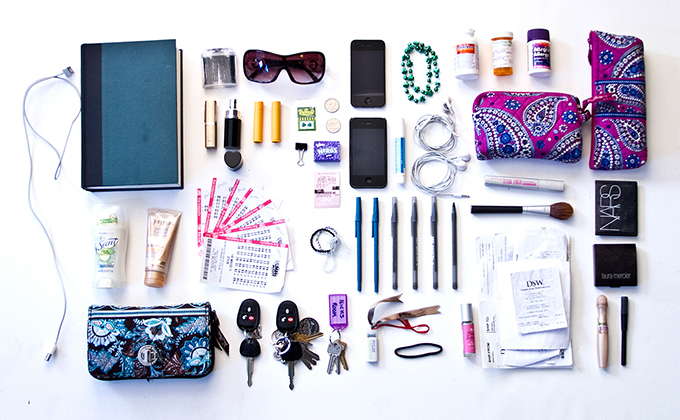 “Balls are to men, what purses are to women.”- Carrie Bradshaw, Sex and the City

I mean if Carrie says it, it must be true, right?

Women love handbags. I’m sure some fashion obsessed pseudo intellectual who minored in psychology could write a great blog post about how the kind of bag a woman wears reveals something profound about her, but I’m actually intellectual. Besides, this is Pulse Creative; We aren’t superficial, we’re intrusive. So while the girls were out to lunch, we may or may not have emptied the contents of their beloved companions, and photographed them in hopes of learning more about their kind. And learn we did.

Upon first assessment, Purse #1 was unanimously deemed “quite standard.” A minimalist. You have your wallet, light makeup, hair ties, tissues, and deodorant. What was interesting was the fact that she had an iPod Touch, Blackberry AND an HTC phone. I am now entirely certain that the owner of this purse either has multiple boyfriends or is an international spy.

Now Purse #2 had me confused for a bit. Everything seemed normal…too normal. Then suddenly I noticed a pattern; There exists two of almost everything. Two chapsticks, two black pens, two blue pens, two sets of keys, two purple bags, and two sets of headphones. Why would someone need two of everything? In case you lose one? logical, but that can’t be it. If you lose the purse, you’re #&$*ed. I know this person, she is incredibly efficient…too efficient. I think she has a twin that she “tags in” whenever she gets tired of dealing with the men in the office. Some other items to note:

3. Not shown, but this purse had a HUGE pile of old receipts (time for some Spring cleaning)

4. A small vial with the label “Basic Instinct Sex Attractant” (she says its just perfume…whatever)

Purse #3. Three metro cards. Expired? maybe…something’s not right. Why would someone carry miniature metal torture devices? What’s inside the NAKED rectangle? This time, my “Ahah!” moment came courtesy of livingsocial;  A pole dancing class voucher. (Perhaps, someone is considering a change of profession – no wonder she always comes in late.)

In the words of WuTang, Purse #4 “ain’t nothing to f*ck wit.” I noticed the same torture devices as in Purse #3, but they almost seemed like toys compared to the rest of the contents. I mean, if the apocalypse were imminent this is definitely the purse I would want to steal, but I digress. Baby wipes & children’s vitamins? So she’s a mother? She can’t be, she carries a magnum condom and a pregnancy test. So she’s careful (I could go on and on about these two items but I’ll leave it at that 😉 ). She carries a rosary, so she’s religious. Superglue can be useful. And black leather gloves cannot be considered sketchy….unless, that black & white egg shaped thing opens up to be a screw driver. And it does. Ladies and Gentlemen, we have an assassin.

So what did I learn? Women’s handbags are like complex biological entities. Stay the hell out of a woman’s bag, the less you know, the better. взять займ с 19 лет без отказа