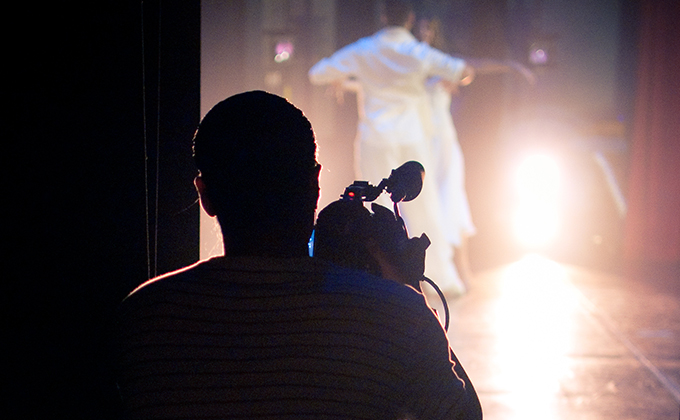 As all of the paparazzi and news stories hit, the Pulse Creative team takes a deep breath, gives some high-fives, pats on the back and some of us needed a full day of the boss’s personal recuperation medicine (aka a day at the spa).

It was an amazing event due to the grand visions of the Chmerkovskiy and Volynets families, who were great to work with as always. But behind the scenes our little team of idiot savants wind down and give me the inside scoop to how intense and challenging the project was. Here are some of the perspectives from the Pulse team:

Jason, lead designer and director of photography on the project, explained, “The production was very intense and challenging. From the moment I arrived at the Manhattan Center I was busy working doing everything from setting up tables to getting ice. I shot footage all day and at the end of the event I helped put everything away just as I had helped build it. Anyone who puts together an event needs to know that sh*t is never going to go the way you planned. Never.  No matter how long you’ve been planning … whether it is months or days. You have to adapt and keeping moving forward.”

Todd, one of our videographers who was working three cameras at the same time at one point said, “It was crazy getting the different angles, trying not to run out of film and making everything look stunning at the same time. Twelve hours of continuous filming is exhausting, not to mention that I was fighting against 100 other cameramen for the same shot. But over all it was so much fun and everything turned out amazing.”

Dhare, our resident creative zombie had a very unique take on the Dance With Me event. “Failure was not an option. For me the day did not begin on Sunday but on the previous Monday. I remember longing to feel the warm sunlight on my cheeks but instead they were bathed in the light from my laptop. When D-Day finally arrived, I entered the Manhattan Center unsure if I would ever come out alive.” He did, I can assure everyone.  He added, “I walked into a sea of beautiful Amazonian women. The air smelled like hair spray and a little too much cologne. My job was to record the day’s events through photographs but I mainly spent the day trying to survive. The music was booming and the lights were blinding, but I had to finish my mission. I remember another photographer next to me, but I don’t think he made it out of there. I never learned his name but I will never forget him.”

Allison, the production manager of the event could not have done a better job. The event planning gods were smiling upon her on June 5th. “The main challenge was timing. This was a huge event and we only had a few days to pull it together. Using every resource we had we made it work. It was both physically and emotionally demanding but we all pulled through. The Dance With Me family insists on excellence and we provided them a team of knowledgeable, hardworking individuals and we gave them everything we had and more. Pulse Creative handled everything from food to lights to security. To put it simply, if it was at the event, Pulse had something to do with it.”

Alex, the production coordinator, like the rest of us dedicated her entire week to the Dance With Me event. “There was so much to be done for the event, I don’t even know all that we did. I made sure the we had everything we needed for the event, ordered balloons, table clothes, items for the gift bags, made sure everything was delivered on time and set up properly. It definitely took a toll on all of us but it was well worth it. I can’t wait till we do the next one!”

By the end of the day over 3,000 pictures had been taken, 360 gigabytes of footage were recorded. Everything came together beautifully. You would have never known that all this blood, sweat and tears had gone into this seemingly flawless event. Who could have known that each badge of the 300 badges was printed, hand cut and laminated in our offices. That the programs were designed the night before at 2AM and sent to a printer by 3AM to have them done within hours of the doors opening.  And that the venue had been changed just 2 days before the day of the event.

And just like with any production, every second of hard work and all the stress that the team faced whilst creating this extravaganza, was completely forgotten for a few hours when the show began and Maks & Tony danced out onto the stage until the show stopping Kirstie Alley & Maks dance. Our video and photo teams stealthily, calmly and inconspicuously fanned out around the entire theatre and dance floor edges capturing every conceivable angle of the amazing event.

And then came the last dance, when the Pulse Production team went back into hyper drive because we were back in the limelight. Team Pulse took over again to close down the show…cross the T’s, dot the I’s…figure out the bills…shut down the lights… And the projects still went on back into our offices with online banners to update, press to promote, and more. We have been editing and retouching thousands of photos, working on video teasers and actual feature performance video, updating all the social networks/sites and just doing what we do. Idiot Savants that rely on each other to just get through this grind, the ups and downs, and finish the job.

The Boss lady shooed me away when I tried to ask her about her experience with the event. She said that the whole team did the work and they are the heroes in this story. She takes center stage of the Pulse Office and simply says” Great Job, Team Pulse. But it’s time to move onto the next big thing.”  As the curtains close for us another project begins…

To see other pictures of this amazing event by clicking here.