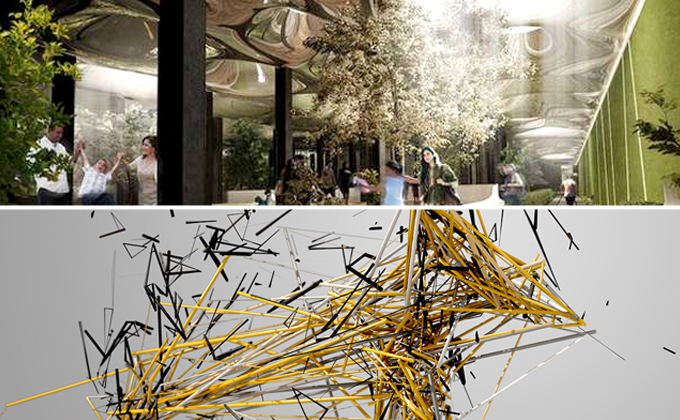 With the High Line project nearing the final phase of completion, New York-based firm, Ramsey Architecture and Design, presents an idea for an underground park in the Lower East Side around Delancey St called the Low Line or Delancey Underground. Like the High Line, they’ve proposed to take an abandoned trolley station underneath the city and transform it into an underground park complete with real live plants, pathways and, yes…sunlight (via fiber optics). Like this idea? Help them out on their Kickstarter page!

As part of the push for London’s hosting of the upcoming Summer Olympics, digital interpreter Quayola and visual artist Memo Akten have partnered together to produce an interactive animation and installation for the Cultural Olympiad at the National Media Museum in Bradford UK. These videos feature digital animations based off of athletes movements. The result: a jaw-dropping video that blows your mind…

Lora Zombie does awesome work, plain and simple. She successfully takes iconic heros and paints them in another light with a style that will always leave a little smirk on your face.

With all the "NEW" remakes of old movies you might think Hollywood has lost all sense of originality. Not so. Just take a look at these new upcoming concepts…zombie-fied.

Flight of the Frenchies

Armed with a DSLR and a few GoPro’s, 4 Frenchmen explore the world of free flight. Nothing more beautiful than jumping off a cliff holding thousands of dollars worth of camera equipment!

I’m an infographic junkie. To me, its just a better way to present data compared to the typical, boring bar graph/pie chart. The problem is (as most designers know), they take forever and a day to develop. Visual.ly recently came out with a new tool that solves this problem. And you know what? It’s #*$*%ing AWESOME!

PressPlayPause is an interesting documentary on how creativity process has changed based on the digital revolution. Produced by Radon, the film covers the question of whether this means better art or just true talent instead drowned out, through a series of interviews with some of the world’s most influential creators in this era.

We here at Pulse Creative love office toys. So when we hear these were coming out, you could imagine how stoked we were. Hasbro has reinvented laser tag. Take a Lazer Tag gun and mix in an iPhone or iPod touch and you get the coolest, most sophisticated way to waste time at the office. Come August 1st, office production will come down a few pegs. сервис подбора займов